Effective April 29, 2008, the Forest County Potawatomi Community (FCPC) Reservation was re-designated by USEPA as a non-Federal Class I area.

In 1999, FCPC designated Aquatic Systems and Water Quality as AQRVs.  In 2012, FCPC approved through Executive Council resolution, the addition of the AQRVs Visibility and Vegetation. On May 1, 2015, the Threshold Effect Levels (TELs) for these AQRVs were finalized and can be viewed here.

All proposed PSD permit applicants  for facilities located within at least 300 km radius (198.25 miles from the geographic center) of the FCPC Class I area are strongly encouraged to send notice of the application to FCPC as soon as possible

The State of Michigan and FCPC do not have an agreement similar to the 1999 Class I Agreement reached by the State of Wisconsin and FCPC.  As such, the full 100 km extent of Class I increment applies to sources locating within all, or portions of, the following Michigan Upper Peninsula counties; Baraga, Delta, Dickenson, Gogebic, Houghton, Iron, Marquette, Menominee and Ontonagon. 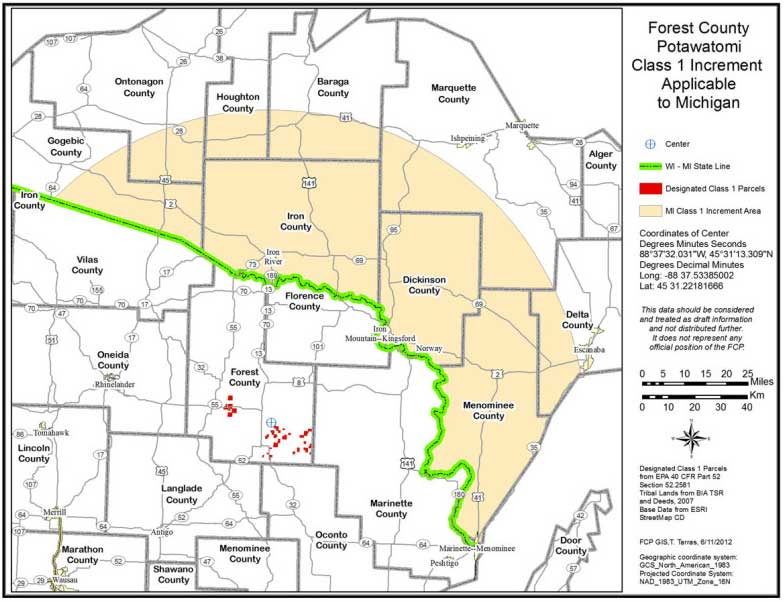 PSD sources that could have impacts on FCPC’s Class I area may be required to do an AQRV impact analysis.  To determine if an analysis is necessary, FCPC will apply the assessment protocols provided in FCPC’s AQRV  document.

Wisconsin and FCPC signed a 1999 Class I Final Agreement that resolved the State’s dispute with the re-designation to Class I status and outlines implementation of Class I for the FCPC Reservation.  In the 1999 Class I Final Agreement between the FCPC and the State of Wisconsin, all proposed PSD permits from facilities located within a 62-mile radius (74.25 miles from the geographic center) of the FCPC Class I area are subject to DNR notice to FCPC and may be subject to an AQRV impact analysis. The FCPC is responsible for performing the analysis per the Agreement, and the permit applicant is required to provide all information necessary to conduct or review an AQRV impact analysis. PSD applicants for facilities within at least a 300 km radius are strongly encouraged to contact the FCPC Air Program  Manager regarding potential impacts on the community’s Class I AQRVs.

In addition to notification requirements related to new and modified PSD permits, the 1999 Agreement includes the following provisions.

In October 2010, the DNR and FCPC signed a Memorandum of Understanding (MOU) to further define the roles and responsibilities for the State and the Tribe established in the 1999 Final Agreement. The 2010 MOU provided an extension until July 2012 for the Tribe to designate new AQRVs and threshold effect levels.

In August 2011, the FCPC Executive Council adopted a resolution designating new AQRVs including Vegetation and Visibility. On June 13, 2012, FCPC submitted three reports to the department in June 2012 on the AQRVs and proposed threshold effect levels:

In the 3rd Addendum to the 2010 Memorandum of Understanding, effective August 7, 2014, WDNR recognized and acknowledged the Visibility AQRV and threshold, and the thresholds for nitrogen and sulfur as they pertain to acidification and eutrophication under the existing AQRVs Water Quality and Aquatic Systems.  It extended the review period for the remaining Vegetation AQRV and threshold, and mercury methylation thresholds under the Water Quality and Aquatic Systems AQRVs an additional six months.

The 4th Addendum to the 2010 Memorandum of Understanding, effective January 30, 2015, extended the review period an additional three months for the remaining AQRV and thresholds.

In the 5th Addendum to the 2010 Memorandum of Understanding, effective May 1, 2015, WDNR recognized and acknowledged the remaining Vegetation AQRV and related ozone threshold, and the mercury methylation thresholds associated with the Water Quality and Aquatic Systems AQRVs on the condition that the associated methods and tools for their implementation are implemented as agreed in the 5th Addendum Appendices.

The map below illustrates the FCPC Class I area, as defined by the 1999 Agreement between FCPC and the State of Wisconsin, applicable to sources locating in Wisconsin only,  including the 10-mile Class I increment radius and the 62-mile radius defining when WDNR is responsible for notifying FCPC of a permit application.  If the new or modified PSD source is located outside of the 62-mile radius and at least 300km of FCPC’s Class I area, it is strongly recommended that FCPC’s Air Program Manager is notified as soon as possible (See WDNR’s map, ”Wisconsin Counties within 300km of Class I Areas”) 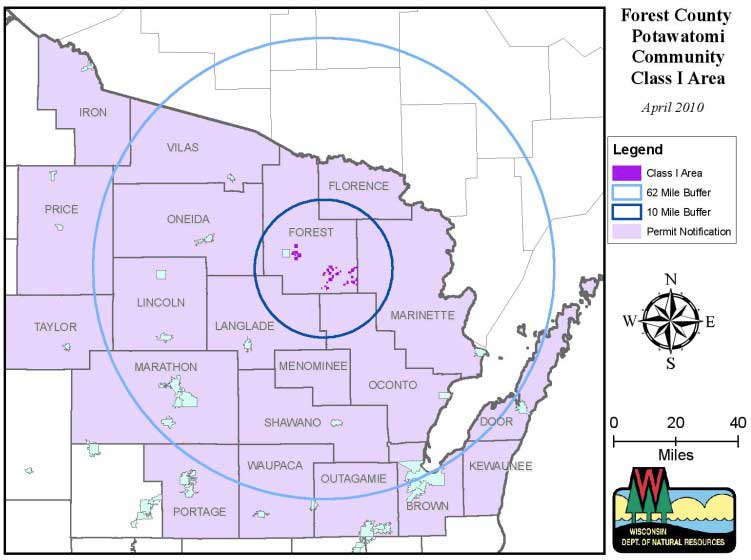 PSD sources locating within at least 300 km of FCPC’s Class I area may be required to do an AQRV impact analysis.  To determine if an analysis is necessary, FCPC will apply the assessment protocols provided in FCPC’s AQRV document.

Class I Analysis and Modeling

The Forest County Potawatomi Air Quality Program has developed a database of modeling receptors for the FCPC Class I area. 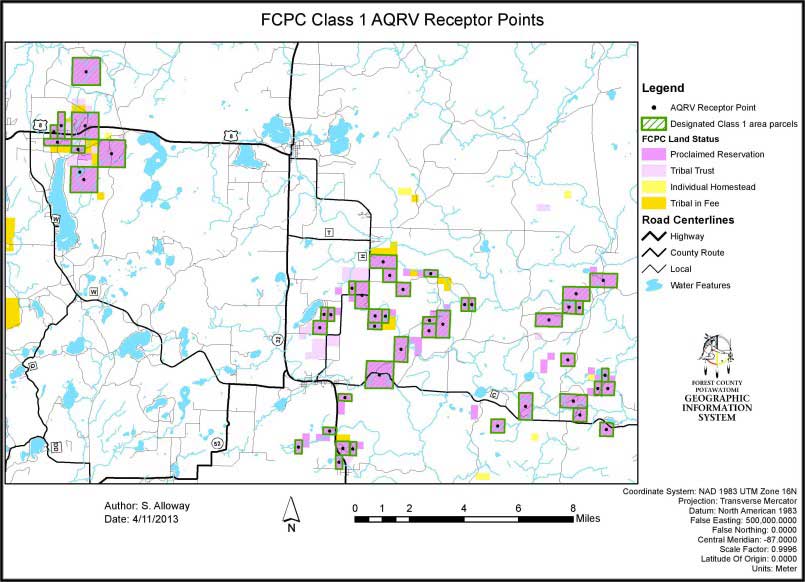 To learn more about the FCPC Class I Area, refer to the Class I Redesignation page of the Forest County Potawatomi Community or contact, Natalene.Cummings@fcpotawatomi-nsn.gov, FCPC Air Program Manager or John.Roth@Wisconsin.gov (608-267-0805), DNR Dispersion Modeling Team Leader.